The Shamrock Trail, Tracing the Irish in Quebec, by Marianna O’Gallagher
This book is a manual for a walking tour of the old city in three treks of at least an hour each. Follow the memories and musings of an old Quebecer on a memory trip through the historic streets where the Irish lived and worked, studied and worshipped.

The Voyage of the Naparima by James J. Mangan F.S.C.

This novel version of a teacher’s diary from 1847 recounts the conditions in County Sligo in Ireland that made Gerald Keegan and his bride decide to take ship for North America.  Critics hailed it on its appearance in 1982 as a welcome and necessary publication given the paucity of books about the famine at that period.  It contains in annex a list of 53 Protestant orphans, with archival reference. 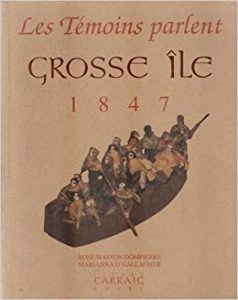 Les Témoins parlent Grosse Île 1847 ISBN 0-9698581-0-8 is the French version of Eyewitness Grosse Ile 1847.  It tells the story of the chaplains who cared for these poor people.  Forty-seven Roman Catholic and seventeen Anglican chaplains worked through the summer,  boarding the ships, administering the sacraments to the sick and attending the burials.

We no longer have any English copies for sale.

Nancy Schmitz, the author of Irish for a Day, as head of anthropology and folklore at Laval University in the 1970s and 80s, carried out an extensive study of March 17th  activities in the city and its surroundings.  With the aim of recording how St. Patrick’s Day was celebrated, the author has actually presented a rich overview of the Irish community of Quebec.  The numerous photos drawn from concert programs, the newspapers, as well as from the personal archives of many citizens form an excellent picture of the social life of the Quebec Irish.

This book deals with aspects of the history of an island, Grosse Île. It covers the years 1832 to 1937, when that island was a quarantine station for the immigrants coming in this country via the port of Quebec. Among these immigrants, the Irish, fleeing their country in the 1840s  fled their country and were victims of typhus. In 1847, some 5000 were buried at Grosse Île. Orphans were, in part, adopted by Quebec families. A list showing the particulars of 600 adoptions has been annexed to the book.

A Grandmother Remembers Grosse Île, by Jeannette Vekeman Masson, translated by Johanne L. Massé. Madame Masson lived on Grosse Ile for ten years before World War I when her father Gustave Vekeman was interpreter of European languages at the Quarantine Station. The book is a flowing account of life in an ordinary village on an extraordinary island. This was the image of a Canada that would first impress the immigrants obliged to stop on account of sickness on board their ships. Vekeman mentions the unveiling of the forty-foot tall Celtic Cross, a ceremony which she attended with her father.

Irish Heritage Quebec has other books to sell. Many of the items we have are rare and have to do with hard core Celtic studies. These are books and reviews written in Gaelic, Welsh,and Breton and English. Many are learned tracts written by the likes of Kuno Meyer, Julius Pokorny, and Brian O’ Cuiv only to mention a few. We have copies of old scholarly reviews such as Etudes Celtiques, Celtica and Eigse among others. We have Contributions to the Development of an Irish Dictionary (Royal Irish Academy). We have dictionaries and grammatical studies. Others are old legends and lore of the Irish, Welsh, Scottish  and other Celtic peoples. Some of what we have on the Irish and other Celts is written in French, German, Latin and Italian. It would involve a great deal of time to present all the specific titles of what we have on hand.
We invite your queries.